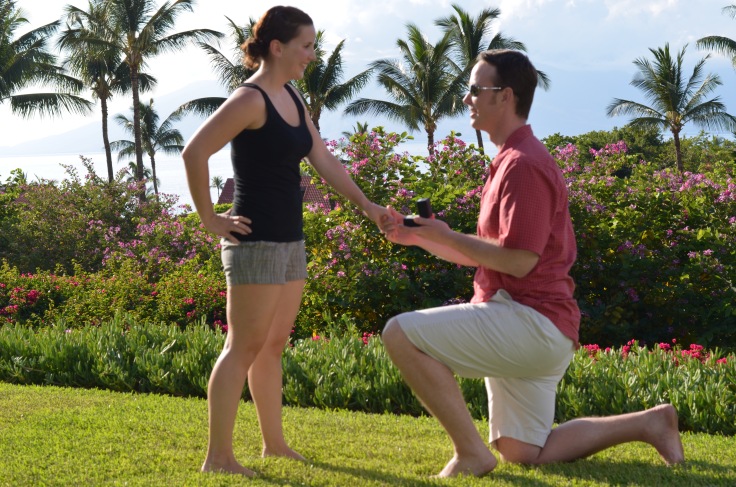 I’ve been meaning to write this post for awhile, actually I have been meaning to write A LOT of posts for awhile, but let’s ignore my severe procrastination and focus on this post for now. I don’t mean to be rude but this post… this post isn’t for you. It’s for me. It’s for when I am old and grey, crusty and senile, and my kids look at me and say, “Mom, tell us how dad proposed to you again!” and I say, “Who the hell are you?” With every glass of wine, every open bar wedding, I can feel pieces of this story slipping away. This might be a long one so get out now, or hang on for the ride – you decide.

The Backstory
At the end of May, Mike and I had a trip planned to Maui aka, the best place on Earth. Since we hadn’t talked too specifically about getting engaged I wasn’t feeling suspicious at all. Exactly one week before our departure date, Mike told me that the ladies at his work were giving him a hard time, asking him if he was going to propose to me in Maui. Thinking that meant obviously he was not going to, I wasn’t at all fazed when he declared, “Even if I wanted to, I would have no idea what kind of ring to get you.” Casually I responded that I liked simple rings – which apparently in ring speak means “solitaires” – I should have been tipped off that Mike knew this lingo and I didn’t, perhaps I am not as smart as I think I am.

The day we left for Maui, I went into work where a few of my colleagues started asking me about whether I thought Mike would propose on the trip – one girl had even gotten engaged at the very part of the island we were staying at! I said I would be completely surprised – I had a feeling he was going to ask me on our trip to Kelowna later on in the summer. As I was about to leave, our graphic designer told me the story about her proposal and how her husband INSISTED that they go on a hike when she wasn’t particularly interested in hiking. The hike… it stuck with me.

Maui Time
Ok, now I was feeling a little curious – after all, Maui would be an incredible place to kick off this journey. As we got to security I watched Mike carefully, he didn’t seem overly nervous. I grabbed his carry-on bag and tried to take note of any odd behaviour… nothing. I even rooted through the damn thing, just to see if I would get a reaction… business as usual. Feeling a bit like a crazy person, I let it go – Kelowna was more likely.

Once we got to Maui Mike said something that made my heart jump… he wanted to go on a hike! No, he INSISTED we go on a hike. DING DING DING “I’ve heard this before!” I thought but given my prior carry-on bag research, I dismissed it. Since I am as stubborn as a mule (to put it mildly) I told Mike that I didn’t want to go on a hike yet – I wanted to laze on the beach for a few days first. Clearly agitated, Mike was relentless on getting his way. “Stop being so weird” I told him, “we can go on a hike later.”

Unfortunately I was wrong. As luck would have it (bad luck, very bad luck), Mike ended up hurting himself extremely badly while boogie boarding at the beach. A note to anyone who wants to go boogie boarding in Maui – if all the tourists run out of the water, and all of the Hawaiin kids run into the water… GET THE HELL OUT OF THE WATER! This unplanned event 1.) Scared the shit out of me and 2.) Really put a damper on any hiking.

Dream Killer
A few days had passed since the accident and Mike was starting to feel a bit better. And by a bit better I mean still pretty shitty. But none the less, he decided it was time to try again for that hike he had requested. Due to Mike’s injury, I was the only one that could drive us around so when Mike suggested we go on a little hike we had been on before I believe my exact words were, “No chance in hell, I will literally kill us on that road.”

The Main Event
After crushing Mike’s dreams (which I was unaware of!) I decided to sit outside on the patio and read my book. I told Mike he should come out and join me and he said ok. I got lost in my book and realized that Mike had vanished. Assuming he had decided to take a nap, I continued reading. Shortly after, Mike appeared at the sliding glass door looking off. Thinking he hurt himself some more, I instantly freaked out – that’s when I noticed an odd shape bulging out of his pocket. No, not an “I’m so happy to see you” shape. Being naive, I said “What the hell is in your pocket?” to which Mike responded, “nothing.”

He then went on to say, “You know I love you right?” Which made me freak out even more. As someone who watches way too much “reality” TV I naturally assumed that Mike was about to A.) Dump me B.) Tell me he just found out he had a love child C.) Inform me that something awful had happened back home. He asked me to come over to him, which I did – scared out of my mind I might add (yes I know, the bulging pocket should have tipped me off but I think I was in shock!).

As he sherpa-ed me over to the grass I started to realize what was happening. “You know I love you, right? You know I want to spend the rest of my life with you, right? You know I want to have a family with you.” Mike then got down on one knee and pulled out the most beautiful ring I have ever seen. Standing in my lululemons with soaking wet hair and no make up on, I was stunned! After stuttering a few times “is this actually happening?!” I bent down and gave Mike a big hug to which he said, “you know you haven’t actually said yes yet.” “Yes, of course!!” I said and he slipped the best present I have ever received on my finger.

I have to say, growing up I always thought I would feel scared, terrified, or unsure when I finally got proposed to but on May 21, 2013 – all I felt was overwhelming love and excitement. I can’t wait to share my life with you Mike, it’s going to be amazing!

Immediately after the big proposal – I ran and changed, threw a little make-up on and nerdily made Mike re-enact the big moment so I could have the keepsake you see at the top of this post forever. That’s right… it’s a fake!

6 thoughts on “Oh my god I’m getting married!”