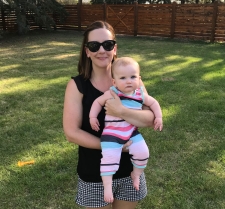 Eight years ago I asked my guitar playing husband to write a song for me… he never did. You can imagine my surprise when I asked for a Mother’s Day Blog Post to make up for it, and he came through with flying colours!

This Mother’s Day Post, written by my husband Mike:

I met Elizabeth on February 14, 2010 at Hudson’s Oliver Square and we went on our first date a few weeks later.  No one would have ever expected that we would end up married considering we both admitted to forgetting what each other looked like after the night we met  (a few blueberry vodka shots may have been consumed).

On our first date we went to see the movie Shutter Island.  Elizabeth started out by making fun of my shirt and then said “don’t get lost” when I got up to use the washroom (I may have taken a few wrong turns on the way to pick her up at her mom’s house).  Luckily, I managed to salvage the date with my charm and good looks!

Fast forward 4 years and we got married.  Liz, being a few years younger than me, wanted to wait to have children.  I, on the other hand, wanted to get on it right away, just so I could be a Dad ;).  Needless to say we waited until she was ready…

Elizabeth never seemed super keen on having kids and I wondered if it would ever happen.  It was odd to me because she has been a volunteer Big Sister for 8 years and was always so great with kids when we were around them.

Then finally, it happened.  In December 2016 we were at De Dutch for her sister’s birthday breakfast and Liz spent about 75% of the time in the washroom.  On our way home Elizabeth wanted me to stop and pick up a pregnancy test but instead… I dropped her off at home and went to watch football with my buddies for a few hours.  I picked up a test on my way home, she peed on the stick and sure enough, she was about to become a Mom, and I a Dad!

I’d like to say that we both jumped for joy but the reality was we were both a little scared.  Our lives were about to change forever…

On August 20 we had our baby girl Stella. Liz constantly reminds me that I had little to do with the delivery and the truth is that having a baby is far more demanding on the Mom.  (I can just see all you moms rolling your eyes with the obviousness of the prior statement, but sometimes you have to say it to recognize it.)

Just as I expected she would be, Elizabeth is a great mom!  She gets up in the morning without complaining (those of you that know her know what a big deal this is), she changes countless diapers, spends countless hours nursing, playing and raising our beautiful daughter. Stella is very lucky to have such an outstanding Mother.